This delightful two man show is a heart warming story filled with wonderful poetry, jokes and stories. The play opens with Richard, played by Richard Marsh, talking about his mother who is dying of cancer. At her death bed he is reunited with his father Len, played by Jerome Wright, who he has not seen for nearly 20 years and whom he hates with a passion. What follows is many unlikely and awkward situations whilst Len tries to make amends with his son by being his Wingman in life. At the same time, Richard tries desperately to not make his fathers mistakes and to be better then he was. Even though some of the situations do seem rather unlikely the play is so well-written that it is all very believable. 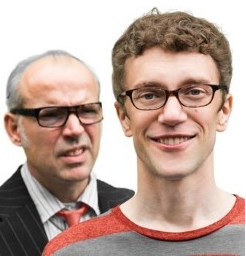 This play contains some of the best poetry I have seen on the Fringe so far. Richard uses beautiful imagery and puns to make this an interesting and comical piece where you hang off of every word. The humour of the writing creates a juxtaposition to the storyline itself which although heart-warming is also quite sad in places. Marsh acts not only as Richard but also as the narrator in the piece, with his father only joining in the poetry at the end.

The set is very sparse, set against a black backdrop with only two chairs and two microphones as props. However, Marsh and Wright have great on-stage chemistry and are great storytellers using mime in various places to bring the story to life. My favourite use of this has to be the trampolining scene which is also best at showing the contrast between the father’s and son’s personalities! The two men stick to their characters well, with Wright portraying the grumpy old man figure, and Marsh playing the rather awkward 30-something. Marsh as the narrator also portrays characters who are not present on stage, his instant change of accents and character are just one aspect of his great skill as a storyteller.

This piece may not be for everyone as it does not have the hard-hitting nature or ‘wow factor’ of some of the other shows at the Fringe this year. But if you are looking for a heart-warming, touching comedy about real-life relationships and the importance of family then Wingman is a wonderful choice. 4/5

Wingman is currently showing at the Pleasance Dome until Monday 25th August as part of this year’s Edinburgh Fringe Festival. For more information on the production, visit here…