These Trees are Made of Blood @ The Southwark Playhouse Review

It is safe to say that the production of These Trees are Made of Blood has surprised me in many ways. A very heavy story opens in a quite boisterous way as we find ourselves in the middle of Coup Coup Cabaret – an entrancing and welcoming set that places the audience in the middle and amongst the performers. This play is a carefully constructed piece of theatre and Amy Draper takes on bold and powerful choices with Paul Jenkins‘ formidable play text. 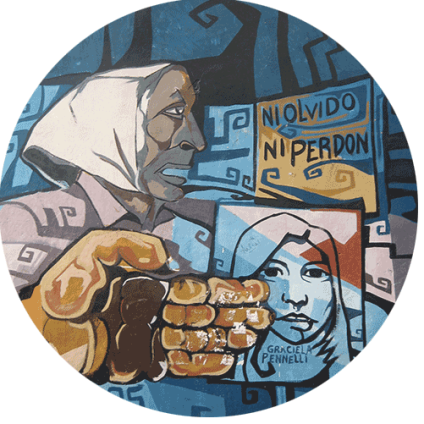 These Trees are Made of Blood tells the story of Los Desaparecidos (the Disappeared), through the narrative of one particular student who, one day, goes on a protest against bus fares, and never comes back home to her mother. It is set in Argentina over the course of the Dirty War, when a military dictatorship was cleverly putting on the appearance of stability and peace, as it was silently doing the contrary. This is mirrored in the club’s vivid and joyous ambiance with its host being The General striving to make jokes and keep the acts going. The music plays non-stopping and plays a major part in creating the environment of the cabaret and the superficial lust, joy and wonder that one could feel at such a place.

When the cabaret numbers finish and the story line kicks in, the impact is much different. Now they portray the rotten inside operation going on that silences every divergent and protesting voice. This shift is quite scary and powerful but it takes quite a while to happen. Generally I feel the show needs a bit of editing, it feels long to me, as closer to the end I see multiple moments where it could have ended wonderfully but the story keeps on going.

The most outstanding feature of this performance is undoubtedly the music. I come home wanting to see the show again to listen to the music once more. The Band, formed by Josh Sneesby, Eilon Morris, Rachel Dawson and Anne-Marie Piazza, is impeccable in the delivery of Darren Clark’s beautiful and purposeful music. Piazza’s voice, allied with her ability to emote and to be in the present moment, brings tears to my eyes.

Years pass by in the storyline, and closer to the end The General is on trial for his crimes of abduction, rape and murder. He is unaffected, cold and confident he has made all the right decisions for the sake of Argentina’s newfound peace. It is frightening to see such conviction in his eyes, to see no regret, to see someone so morally perverse that he looks at no means to reach his ends. Greg Barnett does a great job at portraying The General as a genuine human being who simply and firmly believes in his ideas. Ideas are the most resilient parasite there can be – as stated by the General in the play – and this is true for the best and the most terrifying ones.

These Trees are Made of Blood is a reflection on a vile past and how it effects the future and everything we believe in today. So often we forget those who fought our battles and so often we forget to fight the battles left to fight. We become oblivious and conform. This is true for the 70’s and 80’s in Argentina as it is true for us today, in the UK or anywhere else in the world. We need to keep our eyes open and strive to make our future unstained by the blood of more innocent and brave activists.

This play may tell a past story but it is one that is important to be told today so that the Disappeared are not forgotten. Do watch this brilliant and innovative piece of theatre – you will not regret it. 4.5/5

These Trees are Made of Blood is currently showing at the Southwark Playhouse until Saturday 11th April. For more information on the production, visit here…