The Absence of War @ The Theatre Royal Bath Review

Headlong’s latest touring production The Absence of War sets to give us a look into the inner workings of the Labour party during an election campaign. This cleverly written play from David Hare expertly intertwines satirical comedy with important issues. This mixture makes it not only a very interesting piece but also an entertaining one. 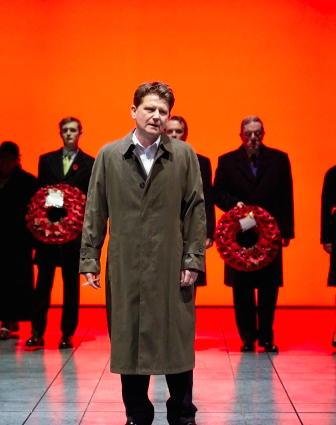 The plot follows George Jones (Reece Dinsdale) the labour party’s eccentric, theatre loving leader as he tries to finally get his party elected. He is helped by his colleagues who include hired publicity adviser Lindsay Fontaine (Charlotte Lucas) and his minder Andrew Buchan (James Harkness) – along with several other party members. Throughout the play Jones comes up against some distressing challenges – and also some rather funny ones – in his journey through election season. Can the Labour party get voted in? Or are there too many forces working against them?

Jones struggles with not being able to be himself when in the public eye, and the different personas he tries to portray are played with flair by Dinsdale. In addition Lucas gives a great performance as the no nonsense and straight talking Lindsay Fontaine. All of the characters within the party are widely different which allows for tension to build up over the course of the play. The choppy and roundabout language can be difficult to get used to, but gives a true representation of the business of politics.

Headlong have incorporated a multimedia aspect with TVs showing the action onstage during press events. This has been added in such a slick fashion and is not only visually appealing but makes the audience question how much we can really trust the media – especially with how much goes on behind the scenes of these events. Although the initial set is very sparse, with just two TVs hanging down and three wreaths highlighted by spotlights, the sets for each scene are wheeled on smoothly – almost becoming part of the play itself. The sets are realistic and coupled with clean lighting design and sound the audience is transported to each event as it occurs.

The Absence of War is a must see for anyone interested in politics and with the General Election just around the corner this play could not be more relevant. However, Headlong’s slick production coupled with a humorous and engaging plot line makes this a production that anyone can enjoy – regardless of their political standing.

The Absence of War is currently showing at the Theatre Royal Bath until Saturday 9th May. For more information on the production, visit here…