Time works alongside us. It’s so engrained in us we even have our own body clocks dictating when certain processes happen. They say time is a healer, yet time waits for no man. Are you someone that lives for the now? The tomorrow or ponders on the past? YOUARENOWHERE is a considered exploration of time through the eyes of award winning performance artist Andrew Schneider. 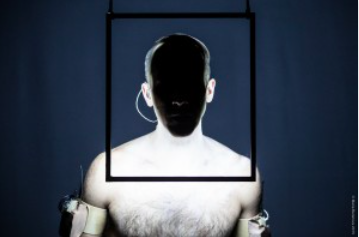 Playing with the audience from the get go, Schneider mischieviously appears and disappears during short and sharp blackouts, already making for an exciting evening. A white clinical set is Schneiders thinking ground and play ground. Part study, part performance the human cranium is placed metaphorically under a series of studies in an 1hr long observation into the effects of time and the processing of information. As human’s, this isn’t necessarily at the forefront of our minds however we are constantly processing masses of information in a matter of seconds. How I may perceive a certain situation may differ from how you perceive it. Schneider captures this beautifully in a series of empassioned lectures fuelled with a smorgasbord of facts and ideas to get your head around.

What YOUARENOWHERE excels in is merging a facet of technological conventions and making these an extension of the human experience, projections showing a demonstration of a bolt of lightning hitting the first and last carriage of a train beckons the question, “If you were to see the bolt of lightning hit the front first, does it then mean that it did or vice versa?” This is a question to leave you thinking, and dances along the philosophical which is utter genius.

Schneider performing a piece alongside a pre-recodered screen test is a sight to behold. Both comical and also enlightening, the segment witnesses Schneider slowly sychronise his delivery of speech into the performers rhythm, and commands the space. Sound is just as imperative as the visual, with Schneider playfully asking an audience member to play around with a CD that has just been given to them and to select the perfect accompabiment in order for Schneider to continue. Technology isn’t at all a gimmick, rather perhaps a commentary on the digitally dependent culture we are now confronted with as gagdets are now apart of the human experience.

The evening is riddled with surprises, with one in particular moment really making for one of the most memorable I have ever witnessed… however, I do not want to spoil this and reveal what it is. The evening marks Schneider as a theatrical magician, really grasping onto the idea of the past, the present and the future, and making the audience yet again question what they have witnessed. If you can, I advise you to watch this evolution of theatre. 4.5/5

YOUARENOWHERE is currently showing at the Shoreditch Town Hall until Saturday 18th June as part of this year’s LIFT Festival. For more information on the production, visit here…